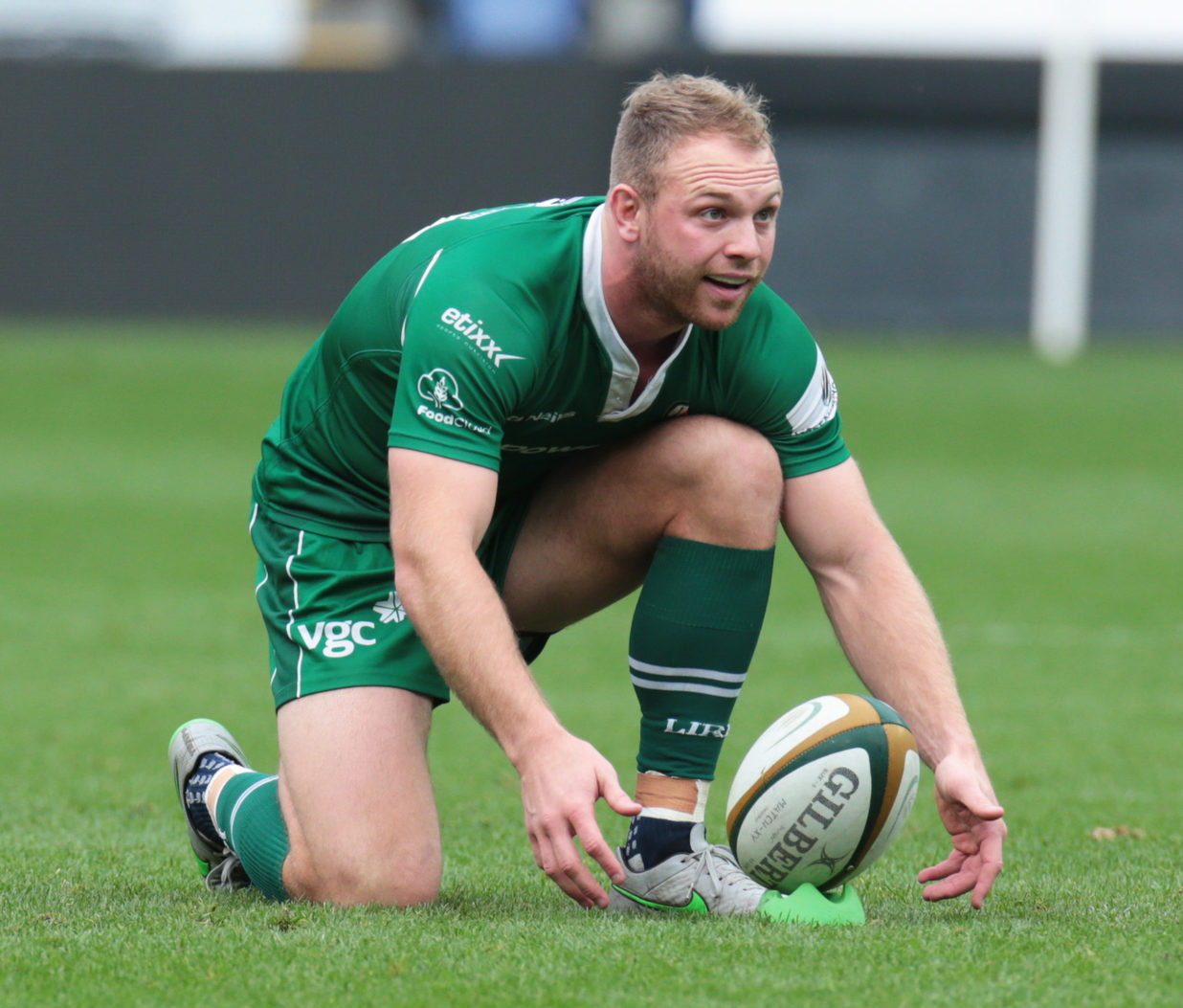 In a month which has seen Saracens lock Alistair Hargreaves call time on his playing career at the age of just 30 following repeat concussions, Stewart McCullough speaks to London Irish fly-half Greig Tonks about his plans for life after rugby.

Retirement may not be at the forefront of Tonks’ mind at present, but the 27-year-old fly-half is already making plans for the future. Tonks, who joined the Exiles from Edinburgh at the end of last season, is looking to follow in the footsteps of a whole host of players that have carved out successful careers after hanging up their boots.

With injuries forcing the likes of Hargreaves and the Exiles’ very own George Skivington to retire in recent months, Tonks insists contingency plans are more important than ever for players in the professional game.

Setting his sights on a career in finance, similar to former Irish winger Andrew Fenby, Tonks is keen to put his economics degree to the test.

“You’ve always got to have one eye on what you’re going to do after your playing career as you’re only in the game for a short time,” said Tonks.

“I’d like to go into finance and pursue a role in business – I’m doing bits of work experience at the moment to get my foot in the door.

“I’ve been doing work experience at foreign exchange company AFEX which was arranged by The Rugby Players’ Association (RPA), and I’m going back there in a couple of weeks,” added Tonks, who attended the London Irish Business Alliance last month, an event which helps its members grow their business through making new connections.

“Those events such as the Business Alliance are invaluable if you’re looking to get a good break into the field of your choice and it was a very enjoyable evening,” said Tonks.

There have been a number of success stories for players looking beyond their playing exploits, most recently the work of Saracens duo Hargreaves and Chris Wyles, both having launched a craft beer company two years ago. The lager is now sold at the Aviva Premiership and European Champions Cup winners’ ground on match days as well as at a growing number of pubs across north London.

“What Alistair and Chris have done is fantastic and it shows what you can achieve if you work together on an exciting project,” said Tonks.

“They are a fine example of players planning ahead and knowing exactly what they want to do with their lives after rugby. Like Alistair, sometimes you can be really unlucky and pick up an injury early in your career or in your late twenties which can have a detrimental impact on you, so it’s always good if you have something to fall back on,” he added.

Tonks, who moved to the UK within a month of being born in Pretoria where his British parents met whilst working, admits becoming a rugby player was never his objective as a youngster.

He said: “I always tried to get good grades in order to go to university and ultimately get a job – I pretty much fell into rugby which I’m very grateful for.

“I think it’s tough for the younger boys in the industry, who are still to establish themselves at senior level. When you get past a certain age I think you have a better chance of securing a contract with another club.”

Whilst rugby can be an unforgiving world when looking to secure a move to another club when out of contract, football is equal in delivering the harsh realities which has recently been highlighted in Sky Sports Originals documentary ‘Out of Contract.’ Following the plight of five professional footballers searching for new clubs, the documentary portrays the bleaker side of sport. In the summer of 2016, 844 professional footballers in England found themselves out of contract with just 154 signing new deals.

Rugby has its own support network, the RPA, an organisation which has been tremendous in its support according to Tonks.

“The RPA has been fantastic for me and they are a great support network when helping you get on a course or making contact with the right people when needing assistance with something,” said Tonks.

“I hope people make the most of what they have to offer as they provide an unbelievable service,” he added.

Kim Johnson, Personal Development Manager for the RPA, who works with players at London Irish, is pleased to see the number of personnel using the service.

She said: “Research suggests that the first two years post retirement can be the most difficult of times for a player, so it’s great to see many current players putting plans in place.

“Greig is another one of those players who is keen to combine his playing commitments with his work experience in finance at the moment which is a very astute thing to do.

“I base myself at the training ground each week and provide the players with support, whether it is through one on ones or by putting on presentations for the team as a whole – the service is a vital part of the professional game.”

Whilst Tonks is looking to the future in respect of his own pursuits post playing career, the Scotland capped back is enthused by his future with Irish.

“I’m really enjoying my time at London Irish and we are really building momentum at the moment,” he said.

He added: “Brendan Venter has come in and new coaches headed up by Director of Rugby Nick Kennedy have been introduced, so from day one there has been a whole new focus.

“Everything that has been introduced to the players has been really good and there is a really positive atmosphere at the club which is shown in the way that we play.”

Irish will be looking to make it eight wins out of eight for the season with victory over Connacht Eagles this afternoon, a sequence that Tonks puts down to a combination of playing ability and team culture.

“There is a great group of guys at the club and each player is really thriving off the coaching set-up which has offered so much already. We have a very knowledgeable group of coaches who are an expert in their field – they are also different in their personalities which blend nicely.

“They are a good group of guys who finished their playing careers recently so they know what it’s like and have a lot of experience to draw on. I’m a big fan of the set-up and I’m really enjoying it.”

Beginning his career with Leicester Tigers, Tonks moved to Northampton Saints in 2010 before being snapped up by Edinburgh Rugby following the departure of points machine Chris Paterson in 2012.

It was whilst with Edinburgh that Tonks got his break in the Scotland set-up by virtue of his Scottish mother and he made his debut against Samoa on a tour of South Africa in 2013.

Capped six times, Tonks says he enjoyed his time with Edinburgh, but admits he fell into the comfort zone during his four year stint north of the border.

“I probably became quite comfortable up there and maybe got stuck in an environment that I wasn’t thriving in.

“It was always going to be a huge challenge for me coming here, but it’s ultimately for the good of my career, especially for my development,” he said.