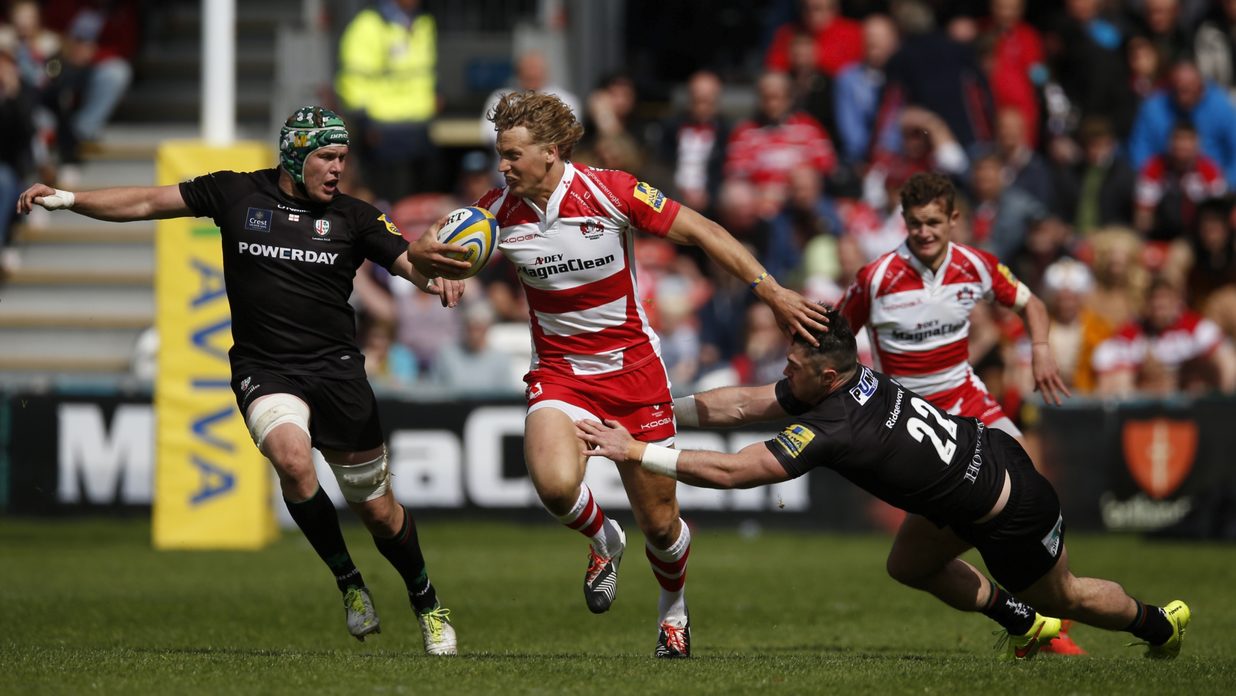 London Irish travelled to Kingsholm for their Round 21 Aviva Premiership clash with Gloucester in the penultimate game of the season, hoping to be the first visiting side to claim a win there in 2015.

Glenn Delaney made three changes to his backline to face the European Challenge Cup winners, with Tomás O’Leary and Shane Geraghty returning to the starting lineup either side of Chris Nokaes, and a return to the starting XV also for James Short.

In a game that saw Irish dominate the first half, they were unable to turn pressure into points.

In the end it was 20 points from the boot of man-of-the-match Greig Laidlaw and two quick fire tries late in the second half from Gloucester that proved the difference.

London Irish had the final say with Andy Short crossing on debut but it was little consolation as the Cherry and Whites ran out 35 – 13 winners.

The opening ten minutes saw Irish camped on the host’s line. Both Blair Cowan and Noakes came within inches of the line and after three consecutive penalties at the scrum it looked as though Irish would be the first on the board. However, Gloucester defended resolutely, forcing a turnover for Laidlaw to clear.

Despite the early Irish pressure, it was Gloucester who were first on the board, Laidlaw knocking over a penalty from just outside the Exiles’ 22.

Gloucester were reduced to 14 men after 23 minutes with Matt Kvesic seeing red after an illegal hit on O’Leary. With numbers in their favor, Alex Lewington crossed for the first try of the game.

Shane Geraghty found the gap before putting Lewington away for his 11th Premiership try of the season and getting something for Irish to show after 30 minutes spent in the Gloucester 22.

Gloucester struck back moments later, Jonny May collecting a chip kick to finish well under the Irish posts and reclaim the lead for the hosts. With Laidlaw’s conversions the score stood at 10 – 5.

And Gloucester added more points before the break. Captain Billy Twelvetrees broke through the defence with Irish just scrambling back but giving away a penalty in the process, seeing replacement Eamonn Sheridan sent to the bin, and an easy three points for Laidlaw to make it 13 – 5 at half time.

Laidlaw and Noakes exchanged blows through the boot early in the second half, with the Scotland captain out scoring his Kiwi counterpart three to one as the Irish penalty count began to rise with the score standing at 22-8 with 25 minutes to play.

As the half drew on Gloucester built themselves a strong platform. Dominating possession with Laidlaw adding another penalty after 65 minutes to make it 25 – 8 and a big ask for Irish with 15 minutes to play, made even harder as Dan Leo was sent to the bin.

With the momentum behind them the Gloucester pack set up a strong driving maul for Dan Thomas to cross before Henry Purdy crossed in the other corner minutes later after a clever chip through, leaving the score at 35 – 8 with just over five minutes left on the clock.

With the clock in the red London Irish had the last say of the game. After being camped in the Gloucester half for the closing minutes, Andy Short found himself in space out wide to cross in the corner on his debut, making the final score 35 – 13.

A notable mention for Callum Watson, who came on to make his debut at the age of 17. The St George's College pupil, who will be in the Club's senior Academy next season, did himself proud.

Next week London Irish welcome Wasps to the Madejski for the final game of the season.