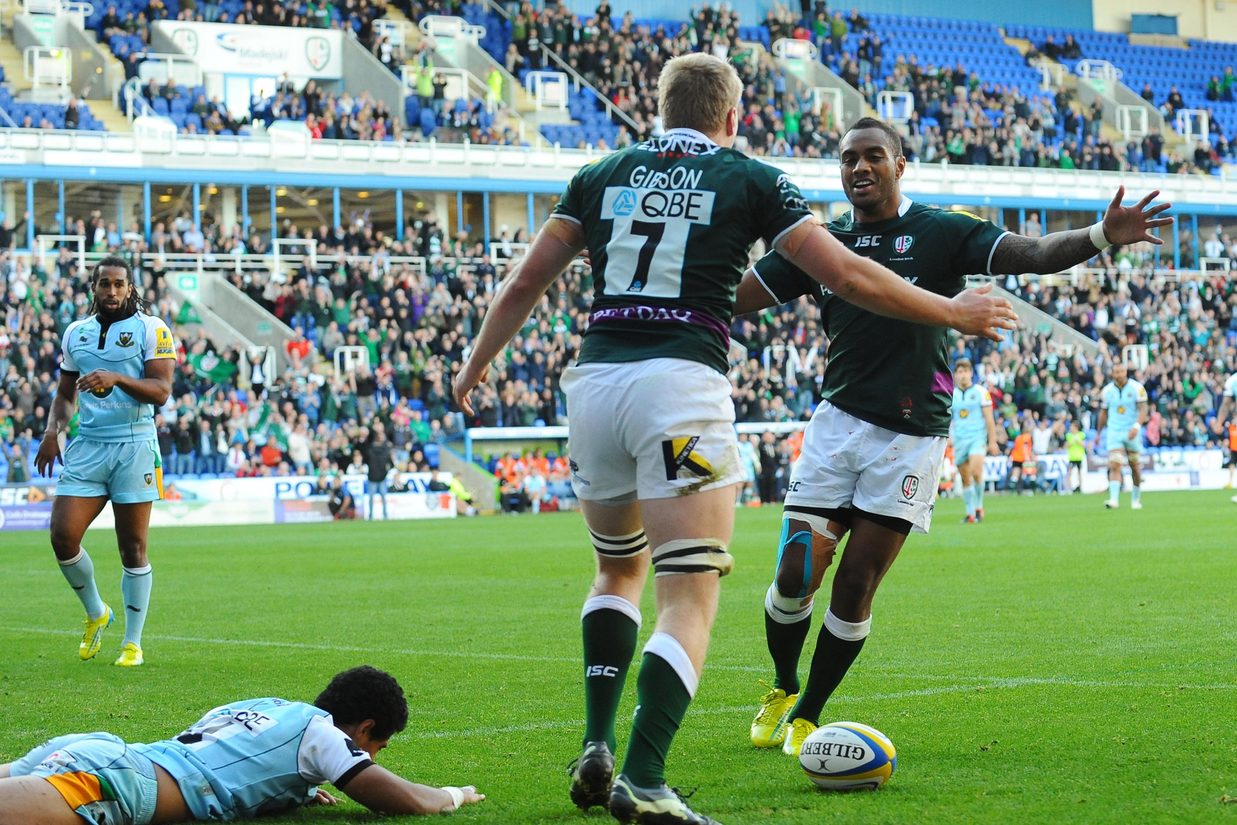 As we host Northampton Saints today on Boxing Day, it is a chance for us to reflect on some of the most memorable past meetings between the two clubs in the Aviva Premiership.

First up we wind the clocks back to January 5th 1999 when a London Irish side including the likes of Conor O’Shea and Brendan Venter travelled to Franklins Gardens.

On that day it was the Exiles’ winger Niall Woods who stole the show with four tries, two conversions and one penalty, scoring all but five of London Irish’s 32 points to which the Saints could only muster eight in reply.

Next stop is November 13th 2004 and again it was an individual display that stole the show in a closely fought encounter. The Exiles beat Northampton 20 – 21 that day, inside centre Mark Mapletoft scoring all 21 of his sides points with two tries, one conversion and three penalties.

For Saints, Paul Grayson was in his usual metronomic form with the boot with five penalties. But no doubt will rue missing a conversion after a Wylie Human try as the Saints finished just one point behind.

In 2009 over 21,000 people packed into the Madejski Stadium to see London Irish welcome Northampton Saints and they were not disappointed as they were treated to a 59-point game that finished 32 – 27 in favour of the Exiles.

Tom Homer kicked eight from eight as Irish edged the thriller, with Adam Thompstone scoring the only Irish try. 17 points from Bruce Reihana and five from former Exile Barry Everitt notched up an impressive points tally for the visitors but Homer’s boot saw Irish home.

And the Irish full-back was also the hero in 2011 when the Exiles travelled to Franklins Gardens. A Nick Kennedy try and two Tom Homer Penalties gave Irish a 6 – 11 lead with ten minutes to go but after replacement Stephen Myler converted a penalty try for the hosts it looked as though Saints had stolen the win.

But, on 78 minutes Irish won a penalty and Homer once again stepped up to slot the conversion and claim a famous win for Irish at the Gardens, and their last win at Northampton to date.

Our final stop sees us take a trip to the Madejski Stadium in October 2012. Irish took an 18 – 0 lead into the break giving the Saints a steep hill to climb in the second half.

Saints came back to score 17 points in the second half but a further 21 points from the Exiles made sure they finished well out of touching distance, Jonathan Joseph having the stand out performance with one try and setting up another two in a game that finished 39 – 17.

And finally, although it wasn’t a Premiership fixture, we couldn’t go through this feature we out referencing the 2002 Powergen Cup final victory over Saints at Twickenham. The most memorable day in the professional era of London Irish.

There's still time to join us for the next London Irish v. Northampton Saints clash on Boxing Day (Saturday 26th December, 2.30pm kick-off). Match tickets are available from only £22 for adults and £4 for juniors. Click here to get yours now or call the ticket hotline on 0118 968 1016.