The Irish duo, both representatives of age-grade Ireland national team squads, also spoke on the cultural identity at the Club and diasporic influence in Sunbury that goes beyond the Emerald Isle.

Englefield and O’Sullivan accrued a collective 16 appearances in Exile green last term, and they maintain that a blend of different nationalities have all contributed to forming the side’s playing style and culture.

The former Leinster Rugby half-back states that the strong Hiberno-English roots at Irish were indeed a pull factor to the English capital, both on and off the field.

“The Irish connection in the Club is very, very tangible and certainly helped out when I made the move over last year, having played for the Irish underage teams, Caolan playing in the Irish Exiles and there are plenty of Irish lads around the Club too,” O’Sullivan explained.

“A lot of the fanbase are Irish expats, you can chat to them after the game and talk about home, what county they’re from and when they came over.

“Seán O’Brien was still here when I arrived last year, and he spoke incredibly highly of the environment here and what we were building.

“I was of course well aware of Les Kiss and Declan Kidney growing up as they coached the Ireland national team, and with Deccie at Munster and Kissy at Ulster previously, there was another level of familiarity with the coaching team, and also with players like Paddy [Jackson].”

Since arriving at the Club from the Dublin-based side, where he made 30 appearances across league, cup and European competitions, the 24-year-old has been engaged with the identity of the Club and how it has aided in evolving on-field activities.

“The Exile factor is a big thing, it’s something we speak about and it goes beyond Irishness also, as we have so many nationalities representing us every game.

“It’s a big strength of ours, that way we can take others’ learnings and experiences from around the world to amalgamate into one side.”

Englefield elaborated on the pride he has as someone of second-generation heritage in pulling on the London Irish jersey.

“Having my mum from Ireland, it’s always quite nice to see how much family means to the Irish people and to those in the Club too.

“Wherever the fans, players or members of staff have come from, there is a lot of Irish people here and it’s clear to see how much the group and being part of a collective means to them.

“From our physios to players and then to fans, it’s a big part of their lives and rightly so because it’s a good group with a lot of family cultures coming from different countries that represent us as a squad.”

He notably credits coaches James Lightfoot Brown and Declan Danaher for inviting him to Irish’s ACE programme after watching him at an under-16s game, and Patrick O’Grady for recruiting the youngster into the Senior Academy.

“Irish was the Club that gave me the opportunity to be a professional rugby player so it’s always class to get out there and represent them, especially where I got the opportunity play in big games like the semi-final and final of the Premiership Rugby Cup.

“As much as it was frustrating for the result not to go our way, everything that surrounds being a London Irish player was great on those days; the atmosphere, the fans, and the work we put in, and I feel it is only going to get better from here.”

The Premiership Rugby Cup campaign afforded London Irish’s junior talent a crack at first team rugby throughout last season, with each Englefield featuring in all but one tournament fixture, whilst his positional counterpart appeared in all four pool stage games.

Having reached a cup final for the first time in 20 years as a Premiership side, the success of the Exiles’ pragmatism with youth was evident, and the boys believes it will only further advance more youngsters into the matchday squads.

“Personally, I think playing in that final was huge, it was the most people I have ever played in front of and the standard of the game was right up there.

“We had Henry [Arundell] and Will [Joseph] playing, who have since gone on to be England internationals and Worcester had a few as well.”

O’Sullivan added: “From an Academy point of view, a lot of lads made their first appearance in that cup run, and without that competition a lot of fans would not get to see the young boys coming through the Club.

“Even as a player, chatting to some of the Academy lads throughout the season, they are so keen to play and having those fixtures gives them a good focal point to work towards.

“With us having two Premiership Rugby Cup games in the opening month of the season, everyone has something to fight for in pre-season because they know they have opportunities early on the campaign, which helps motivate the squad.”

“That whole cup run was brilliant, it gave us young guys like me and Hugh the chance to put our hands up for selection and we had great experiences at stadiums like Welford Road, despite the result,” Englefield continued.

“It’s a great stadium to play at and would have been the first time a lot of the boys would have played somewhere like that, it definitely kicked us on and allowed us to study our improvements ahead of the semi-final and final.” 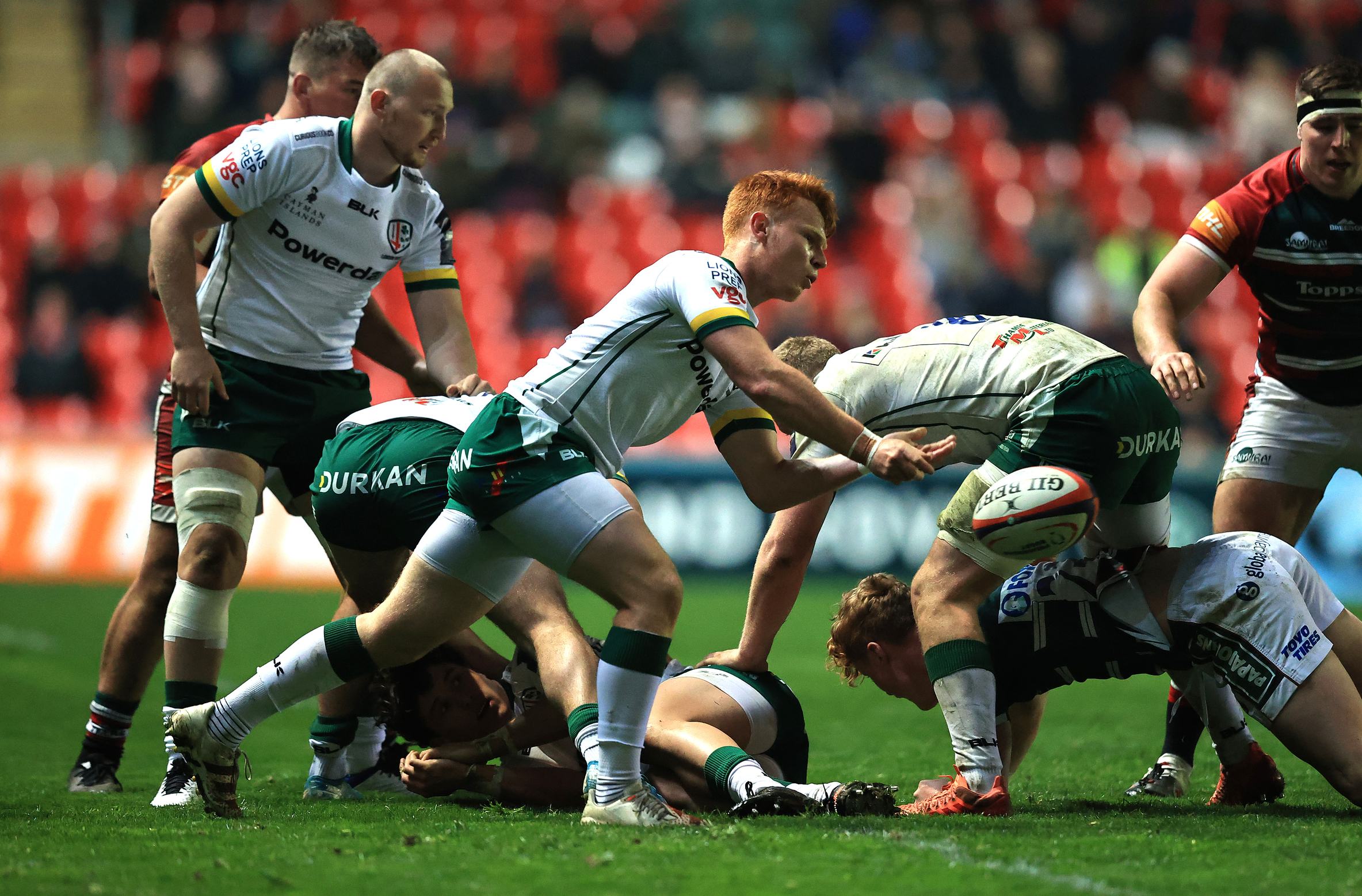 Both 9s have a strong extracurricular work ethic; Englefield recently completing his degree in Sports Coaching and Science, whilst the two-time Leinster School’s Senior Cup winner with Belvedere College has taken on the mantle as Backs and Skills Coach at the Wild Geese, accompanying teammates Paddy Jackson and Matt Cornish in coaching roles with the side.

With the help of Team Manager Alex James and the team at Hazelwood Centre, O’Sullivan is also spearheading eco-friendly initiatives at the Club such as reusable cups and suitable recycling facilities, a ‘baby-steps approach’ he nevertheless admitted.

The ever-determined O’Sullivan has stated his intention in returning the amateur wing of the Club to a high National League level to enable young Exile players to experience more game time- yet, his focus remains very much on the present in regards to the first team set-up under Declan Kidney.

“We’ve come back into pre-season and we’re not starting from ground zero, it’s very much building on what we have built on from last season.

“We haven’t focused too much on aspirations, we’re very much in and amongst the day-to-day grind and putting things in place in order to reap those rewards later on in the season.

“Having been involved in the Challenge Cup last year and now in the Heineken Champions Cup, that will be great for the fans and a just reward for them- we’ll have a right go at that.

“Our ambitions would have to be keep pushing up the table as we know we have been in the mix for higher positions throughout last year and the ideal would be to push on that one step further in the Premiership Rugby Cup.” 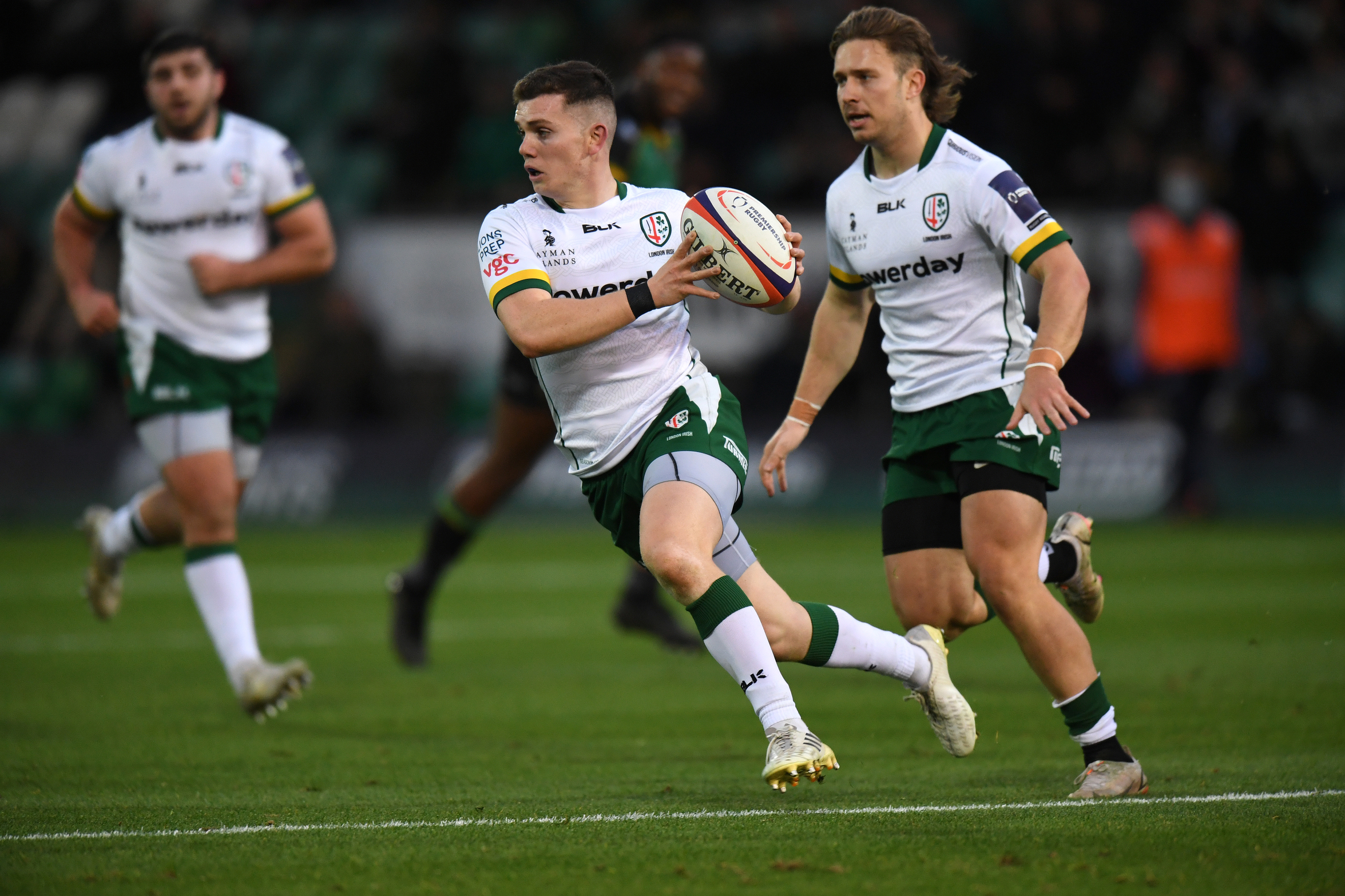 With more game minutes a goal of both players, Englefield discloses how Irish boast an environment of mutual growth and progress on the Hazelwood pitches throughout age groups, irrespective of selection.

“I think for the both of us, it is improving on what we achieved last year- we got opportunities in spurts but it’s aiming to grasp any chance presented to you whilst bettering the squad.

“Ollie Allan has come in now to the Senior Academy, and is another young 9 we can push along and aid in his development.

“We also have the chance to now learn off Joe Powell, another international-capped player, and is another person to take some lessons off in a new year.”

In one of the most competitive positions in the squad, the scrum-halves promoted a healthy, uplifting environment behind-the-scenes where collaboration and cooperation is encouraged.

With Powell absorbed into the ranks this summer from Super Rugby Pacific side Melbourne Rebels, the pairing were also keen to credit recently departed Nick Phipps and Ben White in their advancement as players at Irish.

“For me, it was the way he went about his business in and around the Club, he was always good in how he can speak to people and lead them in the right direction,” the 22-year-old said of Phipps.

“It was an eye-opener for me to actually see what it takes to be a top level scrum-half, and I can only thank him for that as he took me under his wing when he came to the Club.”

“It was great to see someone at that stage of their career and the experience he boasts to retain that motivation and work ethic was inspiring to see and make you want to copy that later on in your career.”

White, a former England age-grade player and recent tourist of Argentina with Scotland, made 25 appearances in his first season in west London and has been eulogized by his fellow Clubmates in his ‘lead-by-example’ approach.

Englefield praised: “The way he took the move coming from Leicester Tigers where he played over 70 times and making an impact here and starting too is a testament to him.

“He probably would admit he might not have expected to play those games for Scotland, but having played those first two games for Irish last season has shown his class and how determined he was straight from the off last season.

“Just from watching him, his skillset is top draw and his kicking game is something to look at for me personally.

“I think he won the game for Scotland that second Test against Argentina, he was unreal and he showed what he can do on the international scene.”

“It was a big decision for him to take that Scotland opportunity, I played against him a lot in the under-20s where I think he captained them and played two years,” O’Sullivan concluded.

“He would 100% back his decision, it’s come off for him big time and I’m sure he’ll be playing for them for years to come.”

Unable to commit to a full Season Ticket? New Flexi Tickets are now on sale where you can secure your place at the Gtech Community Stadium for four or eight-match bundles. Tickets are available for purchase here.