DIVERSITY AT THE TOP OF ENGLISH RUGBY'S AGENDA 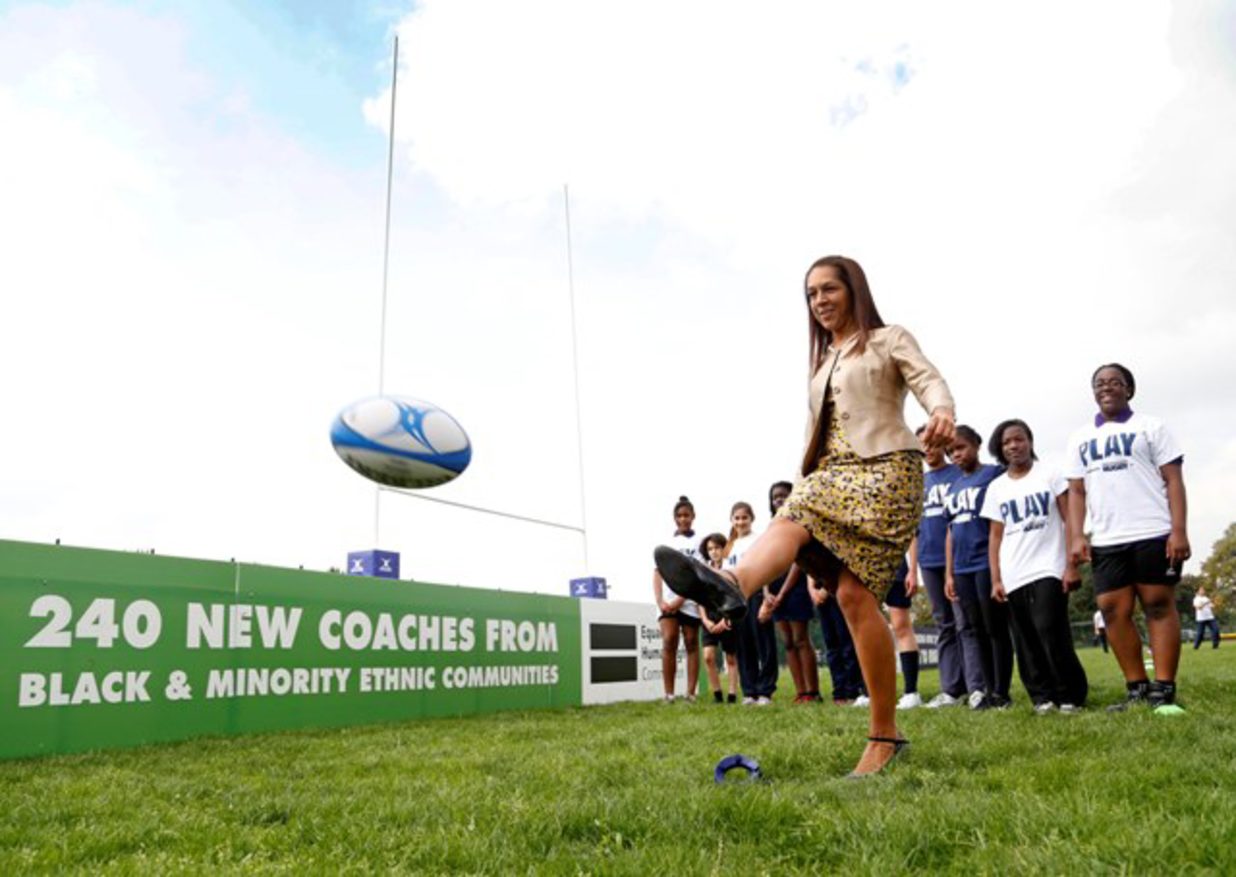 MINISTER FOR Sport Helen Grant MP today welcomed a new ground-breaking initiative from Premiership Rugby that will support an increase in the number of women and girls involved in the sport and promote the game amongst Black and Minority Ethnic (BME) groups.

Utilising the expertise and community delivery infrastructure of the 12 Aviva Premiership Rugby clubs the two-year programme – which is made possible by a £600,000 grant from the Equality and Human Rights Commission – will bring a new generation of people to rugby union.

“Women’s rugby is at an all-time high right now following England’s World Cup win and this initiative from Premiership Rugby and the EHRC will build on that further encouraging more women and girls to get involved.” said the Minister for Sport.

“It’s great that investment will also go into growing the game among BME communities – both as participants and coaches. Hosting next year’s Rugby World Cup in England gives us a huge opportunity to broaden the appeal of the sport and it’s one that we must make the most out of.”

The grant awarded to Premiership Rugby is part of a £2 million investment from the Government through the Equality and Human Rights Commission in programmes to encourage more women and ethnic minorities to participate in sport.

Chris Holmes, Disability Commissioner at the Equality and Human Rights Commission, said: “Rugby is a fantastic way of bringing people together whatever their backgrounds, developing skills and providing great health benefits.  Everyone should have the same opportunity to get involved in the game regardless of their ability, gender or social background.

“We look forward to working with Premiership Rugby to build on the inspirational power of the Olympic, Paralympic and Commonwealth Games and harness the major investment promised in the bids to grow rugby across diverse communities and get more people involved as participants and coaches.”

As part of this new programme Premiership Rugby is committing to:

“We are very proud to have been given this grant so Premiership Rugby can join with the Minister for Sport in broadening the appeal of rugby union and driving it into new communities. This is a big day in the growth of Premiership Rugby.

“We saw recently at the Women’s World Cup how rugby can create role models that the country can be proud of.

“Our Programmes deliver positive outcomes for health and rugby participation, education and social cohesion. This important new grant from the Equality and Human Rights Commission will leverage pre-existing relationships, infrastructure and experienced coaches.

“We have a hugely diverse community programme that is race and gender blind but this would be the first time that Premiership Rugby will deliver a programme specifically designed to increase participation within these two target groups.”

According to the RFU’s Women’s and Girls’ Strategy 2013-17, barriers to participation include women’s continuing negative perceptions of rugby and limited opportunities to play - a recent survey suggests that less than 12% of respondents played rugby at school, with other team sports having a much greater presence in curriculum delivery.

Body-image concerns also inhibits girls’ willingness to be active, with a lack of self-esteem also creating vulnerability to peer pressure. This programme will look to tackle and overcome many of these issues.

In addition to the crucial work with women and girls Premiership Rugby will as part of this programme also grow the game in BME groups.

And Premiership Rugby has committed to

Mark McCafferty added: “At present, 36% of our HITZ programme participants come from BME backgrounds. This programme is the first time Premiership Rugby will focus on increasing BME participation specifically.

“This vital work, delivered locally by Premiership Rugby clubs will leverage the power of the 12 Premiership clubs’ stadia and brands. It will capitalise on Premiership Rugby’s expertise in delivering community participation and coach training programmes.”

Arun Kang Chief Executive of Sporting Equals said: "We welcome Premiership Rugby making this commitment to increase the participation of women and BME communities playing the game. England hosting the Rugby World Cup next year is a great opportunity to engage BME communities and widen the appeal of the sport.

"With BME communities making up over 50% of the population in areas like Leicester and London there is a big untapped market. To engage these groups it’s vital that sports like rugby go to the community rather than expecting the community to come to them. Sporting Equals are already doing this with other sports using community groups and faith centres as a way of engaging the BME community."

England second row Tamara Taylor, who was part of the England team that recently lifted the Rugby World Cup joined the Minister at the launch of the programme today at the Southwark Tigers club in central London.

“Winning the Rugby World Cup was a huge achievement and I believe it has presented the game with a golden opportunity to introduce rugby to a new generation of women and girls,” said Taylor.

“I see the power of rugby every day and see what an incredibly positive influence it can be on lives of young women and girls.”