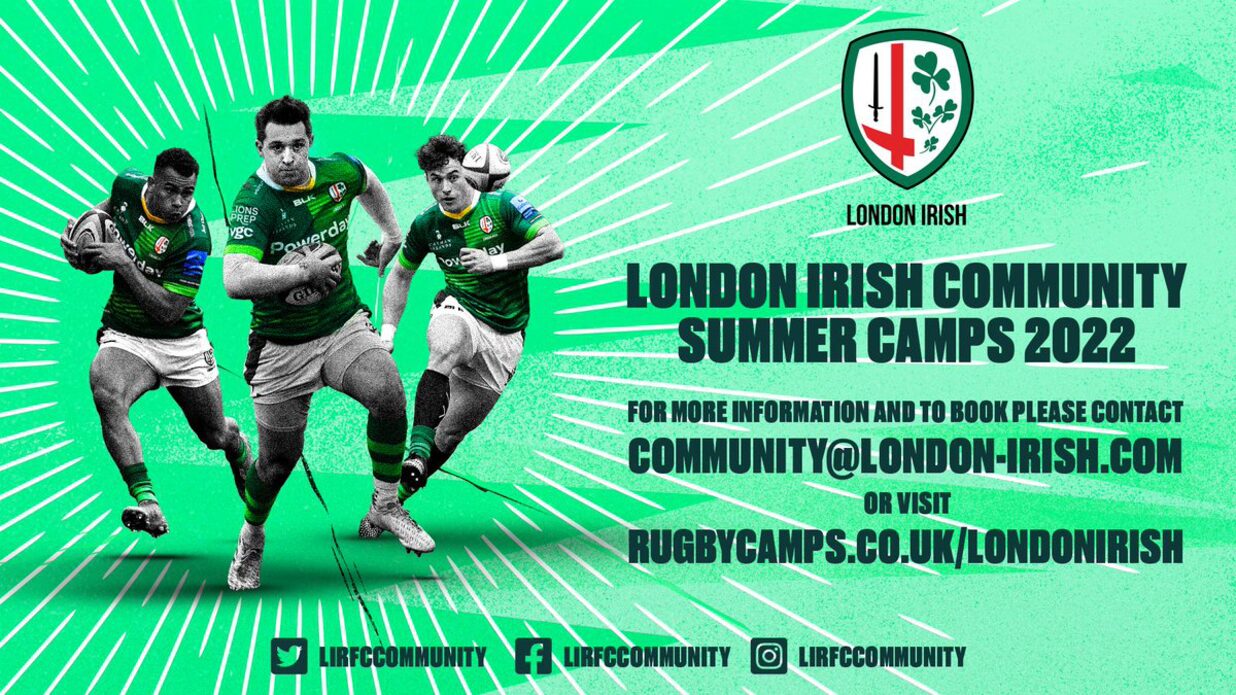 The London Irish Community team are proud to announce the scheduling of summer rugby camps throughout July and August.

The Community team have previously hosted recent successful days out, including a St. Patrick’s Party Festival at Gunnersbury Park before the commencing of the Exiles’ St. Patrick’s fixture against Northampton Saints.

The cost of a one-day ticket for the New Milton camp will be £40, whilst the price of admission for a two-day ticket is a valuable £60.

At Seaford RFC, the Community team will host a one-day festival on the 5th of August from 9.30am to 3pm, costing £45 for attendees between under-7s to under-14s.

St Neots preparatory school in Hook will host another two-day festival of rugby, once again accommodating for the under-7 to under-14 age groups on the 8th and 9th of August.

East Grinstead RFC will play host to a bumper three-day festival; the first two days on the 8th and 9th of August will welcome both boys and girls between under-7s and under-14s between 9.30am and 1.45pm, costing £40 for one day and £60 for two.

England Touch will operate a one-day camp in Maidenhead on the 11th August, and from 9.30am to 3pm will extend a warm welcome to under-7 to under-16 groups, costing £40.

The Club’s very own Hazelwood Centre will lay on a ‘High Performance Camp’ on the 18th of August, targeting the under-14 to under-18 age groups.

Costing £50 for the one day, the camp will start at 9:30am and continue until 3pm in Sunbury.

A two-day festival at Cranleigh School will conclude the confirmed summer camps for the London Irish Community team on the 25th and 26th August, once more catering to the under-7s to under-14s groups and will operate from 9.30am to 1.45pm costing £40 for a day and £60 for two days.

Head of Community Mathew Heeks anticipates a high demand for the camps, and with further to be confirmed, looks forward to welcoming more budding young rugby stars.

“Myself and the Community team are excited to run a series of camps throughout the coming months, and are looking forward to expanding our work into further areas.

“Our previous camps have been a massive success and will be a great opportunity to get kids active in their summer break whilst showcasing their rugby talents.”

Please email [email protected] to book your place at any of the aforementioned camps.