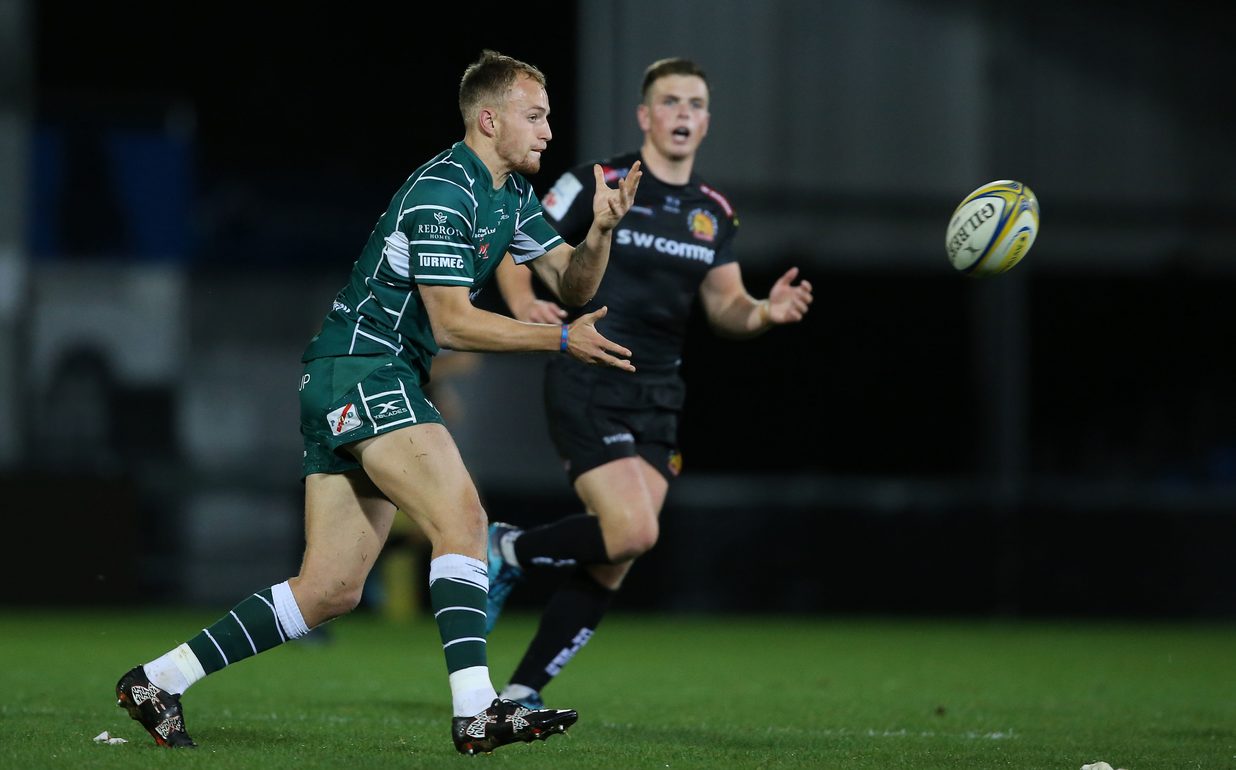 Breaking his ankle while playing for London Irish AASE in 2015, Jacob Atkins thought his hopes and dreams of one day playing for his boyhood club were shattered.

Told that he would be side-lined for up to seven months and with his stay with the academy ending the following summer, the fly-half’s future hung in the balance.

Atkins’ ray of light however, came in the shape of Declan Danaher, who gave him the call that has proved to be a turning point in his career.

“When I was given the news that I would be facing a lengthy spell on the side-lines I was absolutely gutted,” said Atkins.

“However, Dec rang me on my return from the hospital and told me that the club thought highly of me and that everyone was right behind me in my recovery.

“Those words from Dec really inspired me to get to where I am now and I’m keen to continue my progression with the club.

“I owe a lot to Dec, Paul Hodgson and Nick Kennedy for sticking with me through injury. I worked hard on my rehab to get myself back to fitness and I must thank all of the coaches for being true to their word.”

Danaher, assisted by James Lightfoot-Brown oversaw the AASE team and have created a pathway for a number of youngsters to progress through to Irish’s senior academy in recent years.

Now in tiptop condition and continuing his rugby education alongside the first team on a daily basis, the senior academy No 10 is relishing life at London Irish.

“I’m loving my time at London Irish and my focus is on getting better and better as a player every day,” said Atkins, who played for his home county Berkskire from under-13s to under-18s.

“Of course, I have heaps to learn and I have a lot to improve on if I’m to fulfil my ambitions, but I’m extremely excited about my future with the club.

“I’m very fortunate to be in this position and I’m eager to take this fantastic opportunity with both hands, with the aim of eventually cementing my position in the first team.”

A London Irish season ticket holder during his time at The Forest School in Berkshire, Atkins says his breakthrough into the first team was a special moment for him.

“I watched Dodge, Nick and Dec as a kid from the stands whenever London Irish were playing at home and to have the opportunity to play under them now as coaches is pretty cool,” said Atkins.

“To be coached by them is great, they have had a positive influence on my game, making me feel valued and loyal to the club.

“Having the opportunity to play first team rugby last season has really helped my development at the club. When Brendan Venter first arrived as the club’s technical director last year, he held a squad meeting and told us that there would be a rotation policy.

“As a consequence it meant that the younger members of the squad were able to put their hand up for selection with good performances in the academy set-up.”

Waking up at the crack of dawn, Atkins can be seen practicing his goal-kicking under the watchful eye of Hodgson, who brings a wealth of experience to the Exiles’ coaching roster.

“Charlie’s knowledge of the game is second to none and his expertise is invaluable for the likes of myself, Theo Brophy Clews and Tom Parton,” said Atkins.

“We’re only in the first few years of our time at the club, so to be able to work under a guy who has consistently played at the highest level is superb.

“He’s the Premiership’s all-time top points scorer, which says all you need to know about the guy. A lot of the time we pick his brains and ask him questions, and he talks to us about a range of things relating to every aspect of the game.

“His knowledge of game management and communication is superb and I see myself running in after training to note everything down that he’s told us. Some of the stuff he talks about is absolute gold dust.”