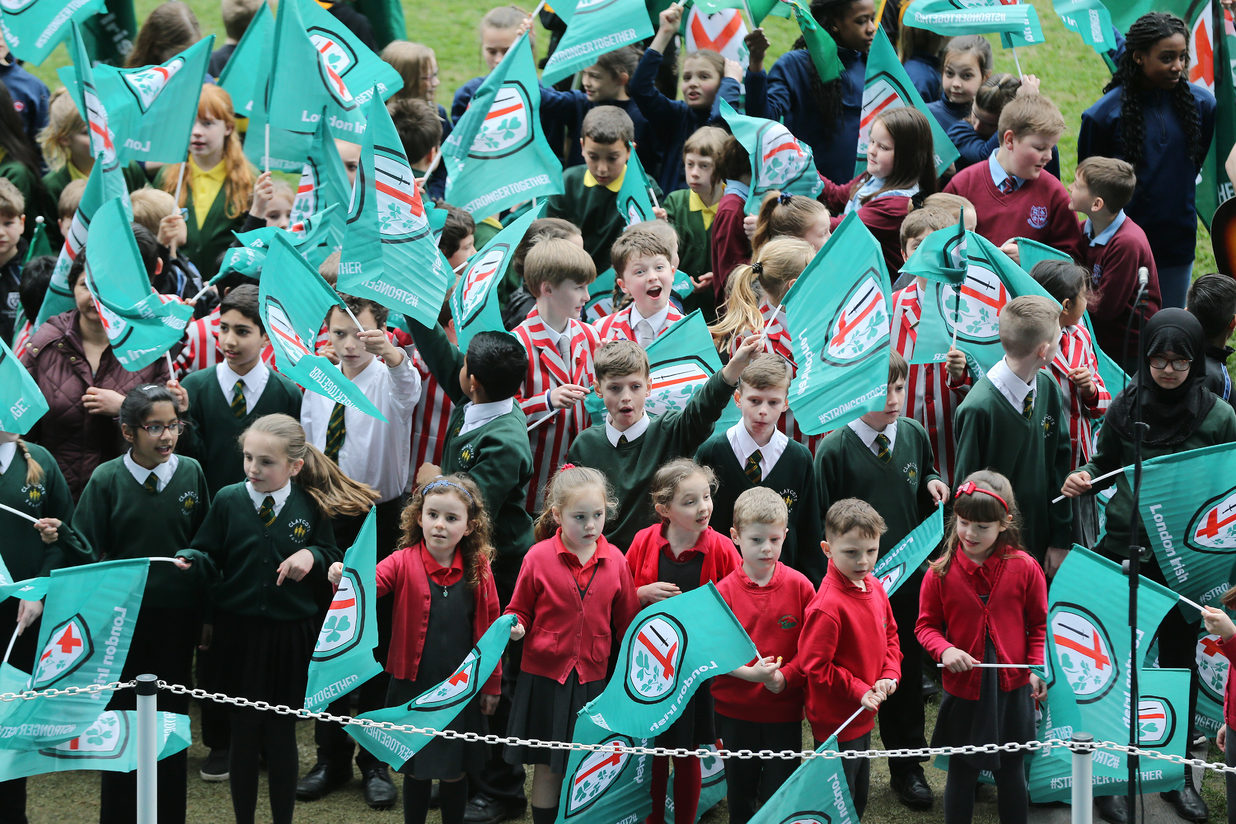 The 2017 London Irish St Patrick's Day Festival broke its previous record for the number of teams and players participating by a considerable margin.

62 teams took part in the festival held at Crosfield's School in Reading, one of London Irish's strong community partners across the season, on the morning before the St Patrick's Party match.

The teams who were split into U7s, U8s, U9s and U10s all arrived at 8am greeted by an army of volunteers who ensured that everything ran smoothly for the start of play at 8.45am.

"We would like to thank all parents, coaches, guardians and family members who came along to cheer on the teams that were in action. They really helped to make the day a huge success," said Andy Keast, Head of Community.

During the day, a team from each age group had a chance to win a "Fair Play" award, receiving a medal from Tom Fowlie and Joe Trayfoot then being part of the Guard of Honour at the St Patrick's Party game at the Madejski Stadium.

Community Schools Coordinator Ali Lawrance said that the London Irish players being there made it a special experience for the winners of the "Fair Play" awards.

"We were very fortunate on the day to be joined by Tom Fowlie and Joe Trayfoot, two of our senior squad players. The children loved meeting them when they presented the festival medals and Fair Play Champion Awards," he added.

"Credit must go to all of the teams who came and took part in the festival, and congratulations to Wallingford U7s, Bournemouth U8s, Maidenhead U9s and High Wycombe U10s who finished the day as our Fair Play Champions."

"All four groups did exceptionally well and we hope that the experience of welcoming the players onto the pitch at the Madejski Stadium will stay with them for a long time to come."

Below are some comments from attendees to the festival, we hope to see everyone again next year!

"I just wanted to say what a fabulous time we had on Saturday. It was worth getting up at 5.50am on a Saturday morning to drive my six-year old to the tournament from Bournemouth," Angela Loveless (Parent).

"Thanks for laying on what was a great festival, much enjoyed by all. I can only guess at the huge amount of work that goes into running such things, so I hope you all feel that effort was rewarded in the rugby enjoyment had by all," Nathan Crinyion (Coach).

"The St Patrick's Party Community Choir singing the Fields of Athenry with the crowd at the Madejski Stadium was a magnificent spectacle," said Keast.

"The schools signed up in October and all of their practice really paid off.

"I'd like to thank the children and staff from each school, they really were a credit to themselves and their schools."

Anna Holmgren was one of the teachers who helped to organise the choir said:

"I just wanted to say thank you so much for Saturday. It was a fantastic opportunity for the children and they were so pleased to be part of it - in fact they can't stop talking about it!

"The parents have been very appreciative too so thank you so much for all of the hard work that went into organising it all."

"Thank you for this weekend! The pupils and parents had a fantastic time. For many it was their first time at a rugby match and hopefully may have converted a few.

"It was great to see the pupils out on the pitch and it was certainly a lasting memory for them."